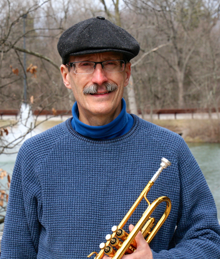 Robert Souza teaches trumpet at the Community Music School of Webster University. In September of 2009, He became a staff musician at the Cathedral Basilica of St. Louis and performs there frequently.

Robert is principal trumpet with Union Avenue Opera, a member of the American Kantorei Orchestra, The Metropolitan Orchestra of St. Louis, Compton Heights Concert Band, and Los Compadres Mariachi Band. He's a founding member of the Gateway Brass Quintet, leader of the JimDandys Dixieland Band and performs frequently with the Heartland Festival Orchestra in Peoria.

He has performed on many occasions with the St. Louis Symphony. For the past fifteen years, Robert has participated in Susan Slaughter's Christmas Concerts at the Cathedral Basilica of St. Louis. Robert was a participant in the "International Brass Quintet Festival" in Baltimore MD in both 1984 and 1986. He was also Assistant Principal Trumpet of the Orchestra of the State of Mexico in Toluca, Mexico from 1986 to 1987.

Robert is married to pianist Susan Wells-Souza and they have two children, Gabriella and Abraham.